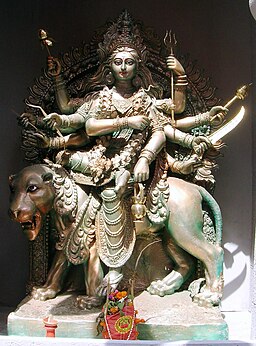 This form of Goddess gives courage and valor. She also takes away the problems related to the paranormal as well. Goddess Chandraghanta is the fierce form Parvati. But her angry form can only be seen if she is provoked; otherwise, she is quite calm.

Tritiya commemorates the worship of Chandraghanta - the name derived from the fact that after marrying Shiva, Parvati adorned her forehead with the ardhachandra (lit. half-moon). She is the embodiment of beauty and is also symbolic of bravery. Yellow is the color of the third day, which is a vivacious color and can pep up everyone's mood.

Chandraghanta | The One Who Inspired Shiva

I bown down to the Devi Chandraghanta, who carries fierce weapons, who is seen riding on top of a fierce beast, may she surround me with her grace.

In this form Durga is 10-armed and rides a tiger. This is a terrible aspect and is roaring in anger. This form of Durga is completely different from earlier forms and shows when provoked she can be the terrible or malevolent. Chandraghanta is worshiped on the third day of Navaratri.

Her forehead is bedecked with the crescent moon resembling the shape of a ghantaa. That is why she is called Maa ‘Chandraghanta’ by devotees.

By her grace all the sins, distresses, physical sufferings, mental tribulations and ghostly hurdles of the devotees are eradicated. Riding on the lion the Mother inspires her devotees with fearlessness. She is the very embodiment of serenity. The devotees who adore and worship her with their deeds, minds and speech develop an aura of divine splendor. Their persons emit out invisible power-waves which exercise a great impact on those who come in contact with them. They easily achieve success in every walk of life. Maa Chandraghanta is ever ready to destroy the wicked, but to her devotees she is ever visible as the kind and compassionate Mother showering peace and prosperity.

The complexion possessed by Maa Chandraghanta is golden. She possesses ten arms which wield weapons and missiles like the sword, the bow, the mace, the arrows and the like. During the battle between the gods and the demons, the horrible sound produced by her ghantaa had sent thousands of wicked demons to the abode of the Death-god. She is ever in a warring posture which shows her eagerness to destroy the foes of her devotees so that her devotees may ever live in peace and prosperity. Divine vision is acquired by her grace. If a devotee happens to enjoy divine fragrance and hears diverse sounds, he is said to be blessed by the Mother.

Maa Chandraghanta should be adored and worshipped with great purity in mind and heart observing all the rites properly. Having acquired her grace, we get rid of all worldly turmoil and enjoy Supreme bliss. Devotees should always have her gentle form in their minds while meditating on her.